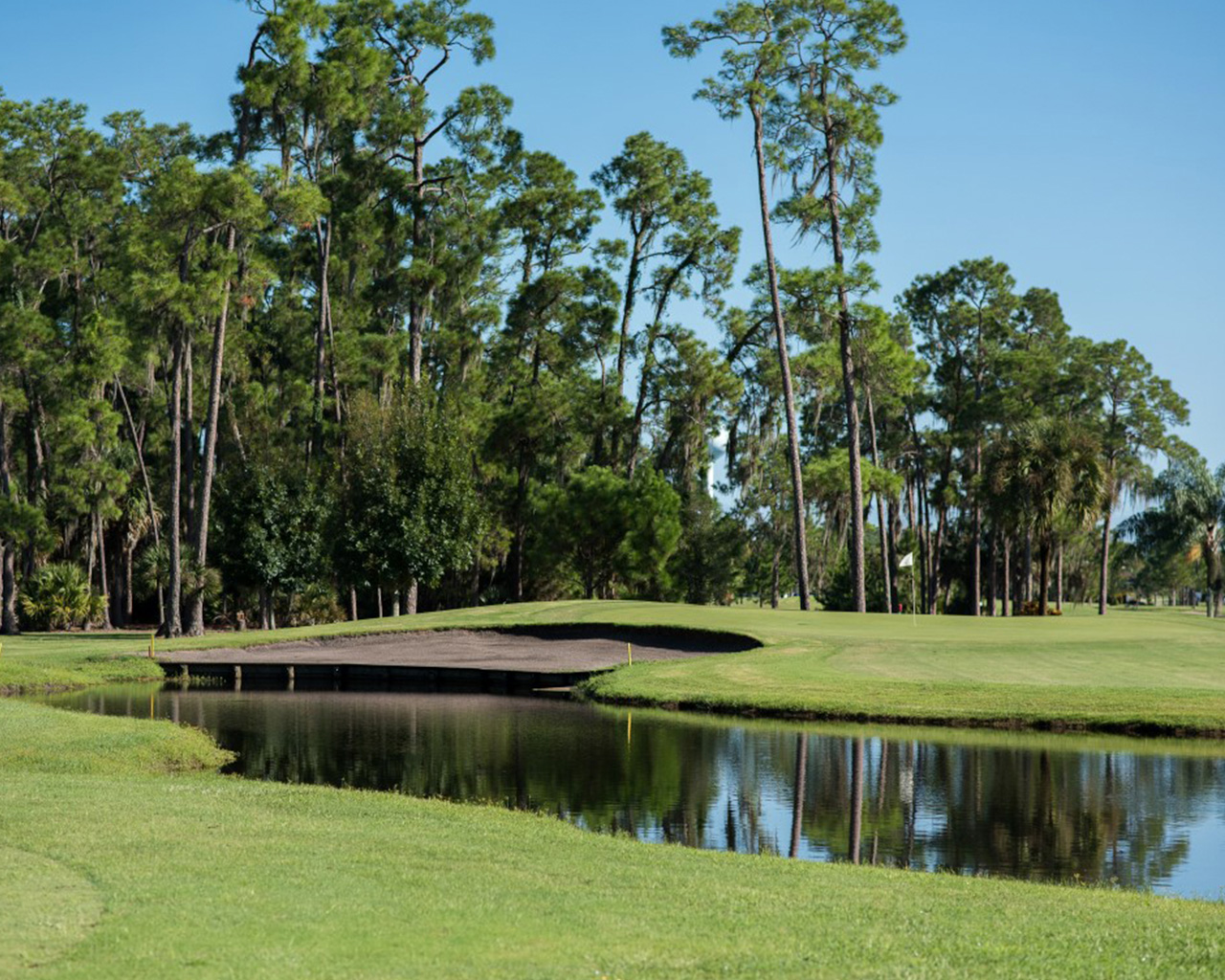 LADIES AND GENTLEMEN, START YOUR ENGINES!

No, we’re not going for a wild ride on the track of the nearby Sebring International Raceway. Instead we’re going on a leisurely virtual tour of the Citrus Golf Trail (CGT). We’ll relax among the gently rolling hills and the small town attractions of Sebring, Avon Park, and Lake Placid, all located in central Florida’s Highlands County.

About 90 minutes away from four of Florida’s busiest tourist locales and airports—Orlando, Tampa, Sarasota, and West Palm Beach—the CGT is easily accessible but light years away from that hustle and bustle. Once there in the rural environs and moving around the county, however, the golfer will be doubly pleased with the much less congested traffic and the lower prices across the board.

Besides the Raceway, the area is famous for its citrus groves, beef cattle, and caladium tropical plants. The locals like to refer to their home as being in the “Heart of Florida,” and they are proud of their nearly 100 crystal clear lakes for fishing, boating, skiing, and sailing.

Championship golf, now emerging with unbridled enthusiasm and once the best-kept secret in Highlands County, is certainly vying for inclusion on the area’s hit list. With moss-covered oaks, lagoons and lakes, and nature preserves for picturesque backdrops, seven (of the 10) 18-hole golf clubs have banded together to form the Citrus Golf Trail and to offer one of the most affordable golf destinations anywhere in the country, even in peak season—from December through April.

I recently played five of the seven courses and enjoyed many of the amenities of Highlands County.

The Citrus Golf Trail is now offering special Stay & Play golf packages for as little as $99 per person per night, including room, golf with cart, and complimentary, robust breakfast. To top it off, the seven courses are also offering a complimentary replay round to anyone who completes an online inquiry.

Four hotels offer these Stay & Play golf packages, but my preference is the Inn on the Lakes where I stayed, arguably Sebring’s finest full-service hotel. Located just off the main drag on Route 27, the Inn’s 161 spacious rooms and suites overlook Lake Jackson and Little Lake Jackson and allow for poolside or indoor lakeview dining. Each room has a wet bar, fridge, microwave, free WiFi, in-room coffee, hair dryer, and iron. In addition to the included off-the-menu breakfast, drink specials and lunch and dinner specials are available to golfers in the critically acclaimed, award-winning restaurant and sports bar Chicanes.

The Inn on the Lakes brochure states, “It’s a golfer’s paradise!” You can walk to two of the golf courses from your room and all others are close by. In addition, the Inn will custom design a golf package for all golfers, regardless of group size. All four hotels provide information about other outdoor activities like tennis, horseback riding, hunting, fishing, and visiting state parks.

Literally down the street from Inn on the Lakes is one of central Florida’s most renowned clubs, Harder Hall. Designed by Dick Wilson and opened in 1958, Harder Hall, since its inception, has been the host of the nationally recognized Women’s Invitational. LPGA stars like Natalie Gulbis, Christie Kerr, Brittany Lincicome, Stacy Lewis, Debbie Massey, Morgan Pressel, and Patti Rizzo have won this event as amateurs. The course is short by today’s standards at 6300 yards from the tips, but it is a perfect test for the top collegiate players each January. The singular layout, a par 72, by Wilson, however, is just about right for the average golfer, and the history, as displayed in the clubhouse, makes HHCC fun to play and to visit.

A short drive from Inn on the Lakes is the 36 holes, both par 72’s, of Sun ‘N Lake Golf and Country Club. opened in 1976 to rave reviews. Complete with nine sets of tees from 7002 to 5046 yards, the course features all the length you want and challenging green complexes. Both local and national groups choose Deer Run for their tournaments. Turtle Run, 1999, demands accuracy over distance—seven sets of tees from 6402 to 5002 yards—with narrow landing zones, many moguls and deep sand bunkers. Both courses are kept in excellent shape. The GM is Jim Kurtzeborn, formerly the director of golf at Fiddlesticks CC in Fort Myers, and he tries to ensure that every golfer has a memorable experience both on the courses and in the clubhouse and leaves with an I-want-to-return attitude.

Another short drive from the Inn to the town of Lake Placid takes you to Placid Lakes Country Club, that town’s premier layout and the “newest” on the CGT. Originally first played in 1966, PLCC underwent a complete renovation after the hurricanes of 2004 left it for dead. New fairways, TifEagle greens, bunkers, and sculpturing returned the layout to life by the end of 2005. A full practice facility and an extensively remodeled clubhouse add to the club’s appeal. The par-72 tips play to 6911 yards with four more sets of tees ending with the forward tees at 4933 yards. The wide variety of wildlife, including the resident gator Otis on the 8th hole, is as much fun to watch as the unfolding of the layout, and the final four holes are as demanding as any in the state of Florida. Owner/renovator Jeffrey Harstine knows what makes a course fun to play as two of his other Florida constructions, Black Diamond in Lecanto and The Legacy club at Alaqua Lakes near Orlando, are highly ranked and very popular.

Before or after the round at Placid Lakes, a tour of the town of Lake Placid is a must. It is a town of murals, a town of clowns, and a town of Melvil Dewey. More than 40 larger-than-life murals grace the side of the town’s buildings depicting the history and the ecology of the area. One of the largest murals is on the side of Toby’s American Clown Museum and School. Since 1993, Keith “Toby” Stokes, a Shrine clown for years, has taught and graduated more than 1500 clowns. He has also collected more than 700 pieces of clown memorabilia for his museum. The inventor of the Dewey Decimal System, Melvil Dewey, also designed the 1927 train station, which is now the Depot Museum and records the lifestyle of generations gone by.

Back to golf and our final short ride to Avon Park, where a 1926 Donald Ross gem, Pinecrest Country Club, is still wowing the players. The motto is “Just golf, pure and simple, the way it used to be.” A par 72, it has five sets of tees from 6719 to 4972 yards. Recently restored so that the Ross features are pre-eminent, the course has false fronts on many of the greens, bunkers that epitomize the Ross design theory of play, and tricky approaches that encourage the classic keep-the-ball-on-the-ground strategy. There are plenty of orange groves, three lakes, and natural wooded areas but not a single condo or home.

Also in Avon Park are the North and South courses of Highlands Ridge, two totally different layouts that share a very high playability quotient. World-renowned architect Dave Harman patterned the North after his award-winning Kauri Cliffs in New Zealand, and his efforts have made the North one of the most popular courses in central Florida. The TifEagle Bermudagrass greens are the fastest in the area, and the tips play at 7141 yards with a Slope of 138. Eight other tees that range from 6703 to 3837 yards allow every golfer to find his/her comfort zone.

Orlando-based Steve Smyers designed the South as an Audubon course with spectacular conservation areas, links-style bunkering, creeks, and natural ponds. With four sets of tees from 6176 to 4469 yards, the par-71 layout is a shotmaker’s course from tee to fairway and then to the green. The Tifdwarf Bermudagrass greens are a delight to putt.

The two other participating courses on the Citrus Golf Trail are River Greens Golf Course in Avon Park and Golf Hammock Country Club in Sebring.

Several other Sebring-area attractions are well worth mentioning. The ubiquitous orange groves provide the delicious “It’s what’s for breakfast” juice, and Maxwell Groves has been a citrus-themed Old Florida country store for 80 years. The store carries the fresh-squeezed OJ, orange ice cream, all varieties of fruit, Florida wines, local honey, jams and jellies, and unusual Florida gifts. Customers can ship fruit to friends and family.

The also ubiquitous cattle herds provide much of the country’s “It’s what’s for dinner” bill of fare, and nobody does it better than Cowpoke’s Watering Hole. Starting in 1950 as a local bar, both the signature steaks with the garlic butter topping and the famous garlic bread were added in 1997 by the owners. These two brothers also introduced a 14-foot live alligator named Bully, whose playpen was inside the dining room. Bully went to his reward in 2011, and he was replaced with a stuffed version. Bully’s playpen was transformed into the stage for live music and karaoke, but the alligator remains immortalized with the savory house appetizer—Bully Bites. The 16 ounce Ribeye and the eight ounce Filet are to die for. Equally lethal are the Country Fried Steak, the Pork Osso Bucco, and the Whole Fried Snapper.

And, of course, the Sebring International Raceway demands a little attention. America’s oldest racing track, the Raceway sped into the sports car racing scene in March of 1952 with a 12-hour endurance race that is now second only to Le Mans in global prestige. Each third Saturday in March, the 3.74 miles of the undulating track plays host to the giants of the sports car racing industry.

Located alongside the hairpin turn at Sebring International Raceway is the luxurious Chateau Elan Hotel and Conference Center. During race week, all the guests have their pedals to the metal with the trackside viewing and the excitement of the 12-hour test. The rest of the year the hotel offers golf packages and the area’s only European-style spa as race track practice and weekend events occur frequently at the Raceway. Another winning combination is the Hairpin Lounge, which will quench your thirst, and the Esperante Restaurant, with its laid back atmosphere and outstanding menu.

Ladies and gentlemen, this virtual journey through the Citrus Golf Trail has come to an end. For you northern golfers who are trying to avoid the rigors of the 2017 winter, it really should be time to start your engines.

Inn On The Lakes